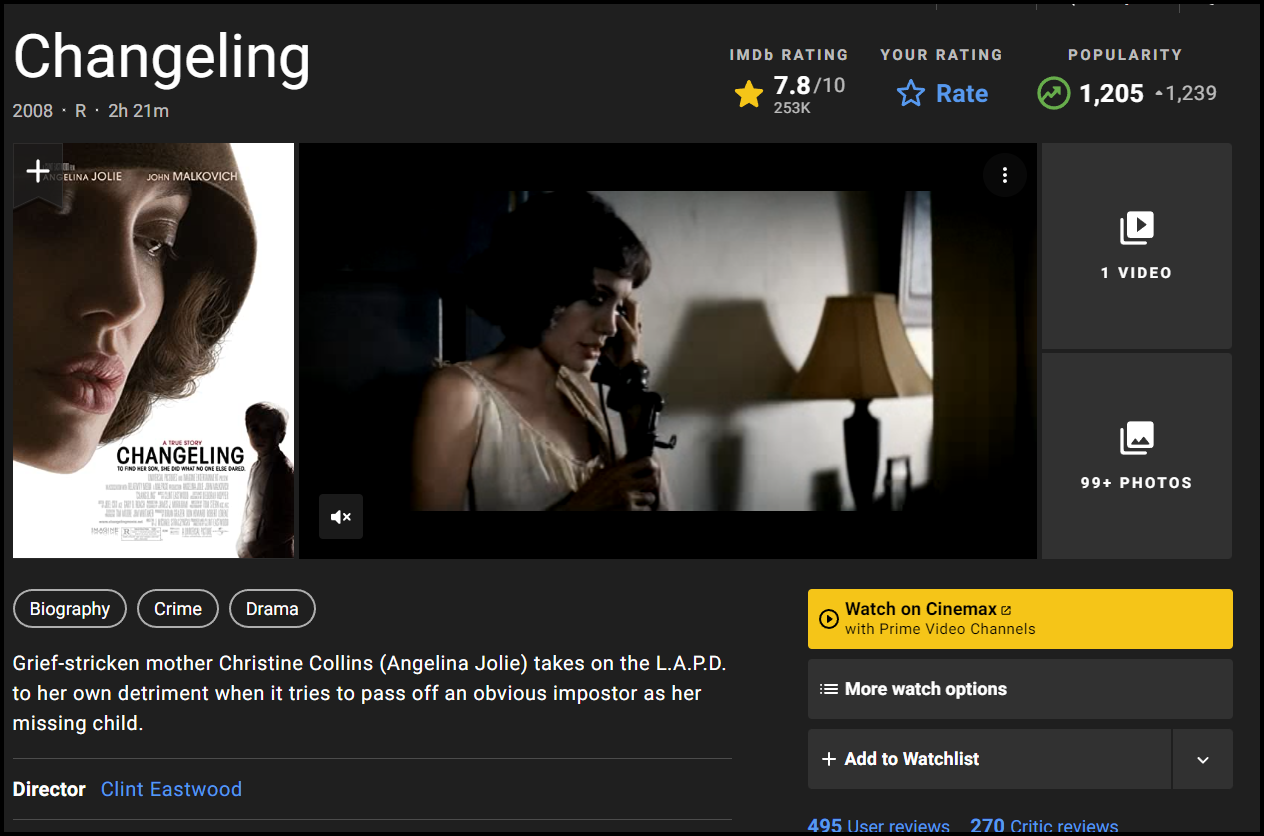 As if we did not know by now – the Police and Prosecutors will, and do, go to any lengths to make any thought-lie-they-think a reality.

Factual Review of The Movie: Changeling (2008)

” is the true story of a single mom

claimed to have found a boy thousands of kilometres away in Illinois, identifying himself as Walter Collins. The missing boy’s discovery was an achievement for the embattled

which had come under fire for incompetency and corruption in recent years. Christine dismisses the claim that this boy, living with her is “Walter” and continues her search alone.

(played by Jeffrey Donovan) admitted her to a mental hospital, assuming her insane. She was held in a psychiatric ward against her will, medicated and tortured. Eastwood has shot these scenes like a horror movie, with nasty nurses leering, pasty women with vicious hair screaming and banging their heads against bars, and a wicked doctor giving Christine jolts of electricity to make her sign a paper confirming that the sinister impostor is her son.

In real life, the impostor was

(played by Devon Conti) a boy from Iowa who was trying to escape from his unhappy home life. People told him that he resembled Walter Collins, so he thought to pose as the missing boy and get a free trip from his hometown to California.

While in the psychiatry ward,

discovers that many women in there were victims of the cops, and they were kept there to remain “quiet.” I feel The LAPD is quite unfortunate to exist in Los Angeles because it has frequently had a negative image in Hollywood movies. See “Lakeview Terrace,” “Training Day,” and “L.A. Confidential.” Many movies have shown corrupt cops, but no other city’s cops have been as dramatically depicted.

Christine’s one ally was a priest

(played by John Malkovich) who wanted to expose corruption in the LAPD and government. Meanwhile, a committed detective

(Michael Kelly) was led to an isolated chicken ranch outside Winesville, Calif where the bodies of 20 young boys were buried.

(played by Jason Butler Harner) is the main antagonist of this movie. He plays a fictionalized role of a real-life serial killer of the 1920s, who sexually abused and murdered young boys, in Riverside County, California. This case is still famous with the name “Wineville Chicken Coop Murders Case.”

The Changeling is a movie about a mother who tries to fight the injustice system of hypocrites and lies. After watching this movie, I learned that everything is not necessarily how it appears and we must do what we think is right, even when others assume we are wrong. With a riveting plot, terrific setting and incredible acting by Angelina Julie and other actors; this movie is strongly recommended to those who enjoy emotional and gripping thrillers.