There are normal liars and pathological liars.

This is an excellent movie for exploring the issue of pathological liars.

The Consider Podcast will be discussing how all men, and women, are liars and what can be done about that fact. As the movie points out and society at large confirms specific lairs are attracted to their own group. Police hirer fellow lying police, prosecutors and judge play golf while they promote their lies and newspaper journalist attract their specific liars; so it goes. Each camps at their group campground.

USA Today removes TWENTY THREE stories from its website over claims reporter made-up quotes and fabricated interviewees for stories on Texas abortion ban, Ukraine and a guide to sunscreen

What has been will be again, what has been done will be done again; there is nothing new under the sun. (Ecclesiastes 1:9)

Resource materials are issues, background information and general knowledge concerning matters that might be discussed on The Consider Podcast. 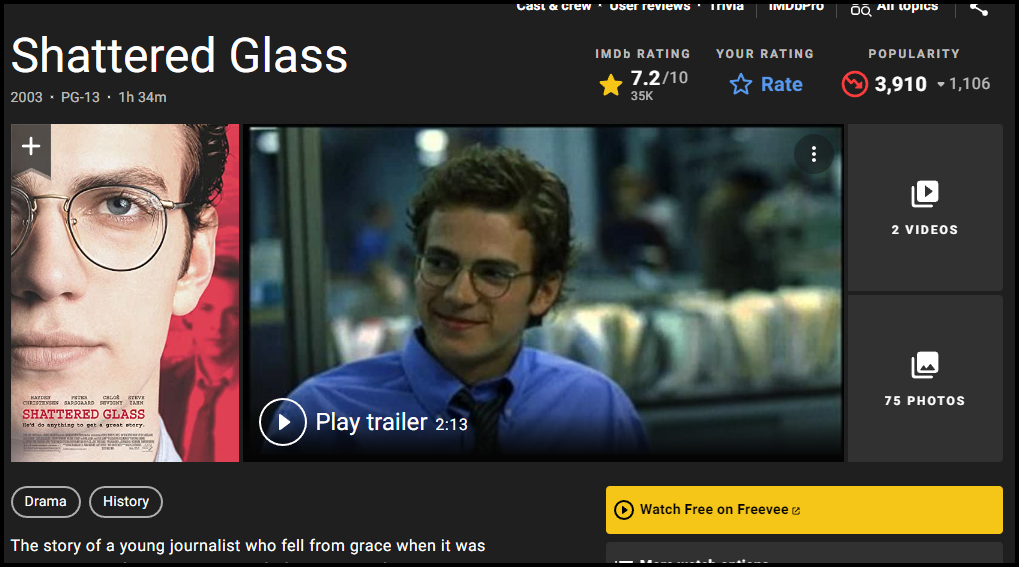 Shattered Glass, is based on the true story of a pathological liar Stephen Glass (played by Hayden Christensen). Glass was a Washington, D.C. young journalist, who achieved meteoric rise to fame as a young writer in his 20s. He got the status of a staff writer at “The New Republic” (TNR) for 3 years (from 1995 to 1998), although, more than half of his 41 articles were either completely or partially fabricated.

Do you still remember some stories of Glass? I remember his article about the political novelties industry, with display of homophobic, racist, and anti-Clinton books, bumper stickers and T-shirts. Also, he wrote about this young hacker who terrorized businesses with attacks on their computers. Then, there was an article about the Young Republicans gathering at a hotel in Washington, partying whole night like an intoxicated fraternity.

Incredible stories!! But, the reality is, Stephen Glass (Hayden Christensen) was fabricating all these stories and unknowingly TNR had begun publishing fiction. The first hole in Glass’ balloon came from Adam Penenberg (Steve Zahn), who was trying to follow up on that affluent hacker who had his personal agent. He failed to find him — or the company, or his Web site, or his agent, or the corporation that hired him, or anything. When Adam contacted TNR, his concern lands on the magazine’s new editor’s desk. The new editor Charles Lane (Peter Sarsgaírd), had recently replaced Michael Kelly (Hank Azaria) and lacked Kelly’s allure, and the staffers favoured Glass instead of trusting cool, aloof Charles Lane.

Without knowing about his actual skills, Glass’ colleagues admired him because he had stories they would have done anything to have covered. Amy Brand (Melanie Lynskey) and Caitlin Avey (Chloe Sevigny) were two of his most admiring fellow workers, who felt protective toward Glass; and said that he pushes himself and works too hard.

Then, there was an agonizing and fascinating progression during which Charles Lane tried to confine the unreliable details of a Glass’ fabricated story, and Glass tries to avoid him. Files were kept at home, phone numbers went missing, no one answered the phone calls, and as it became apparent to Lane that the story lacks the factual accuracy, and a fear began to grow.

The discomfort and tension between some of the characters in this film feels genuine. Almost everyone liked HAYDEN CHRISTENSEN‘s performance in this movie. Also, the movie has presented details about journalism very well. It shows smart offices; the newsroom is situated in an open space, which has many desks, and journalists are the main characters that run the show.

“Shattered Glass” is very well-edited and scored too. The cast of the movie includes both unfamiliar and well-known actors, but either way they were being really “in it”. One may compare “All the President’s Men” with “Shattered Glass” among films on journalism, but it relates to a category found in many professions: a man who appears to be working for the office agenda but in fact he was working for himself. Filled with a mission of his own accomplishment, smart, persuasive, and charming Glass had an explanation for his every act until someone eventually thought to ask a simple question: Is it all made up, more than half of the works?

These days we see a large number of political decisions taken due to personal preferences rather than facts and many corporations are dependent on lies. But, how a young journalist’s up-and-coming professional career came to a halt after discovering that he made up stories seeks to highlight why thorough reporting is crucial. It conveys a big message to all of us to support nothing but the truth and to each journalist to report nothing other than the truth. Overall, if you liked “Spotlight” or any other films about journalism, you’ll certainly enjoy watching “Shattered Glass.”